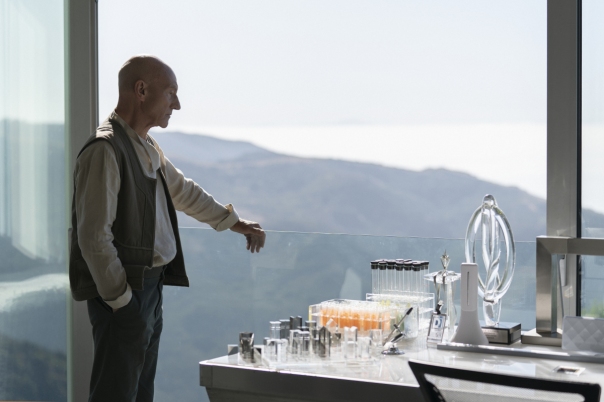 We arrive as aliens ourselves on … some kind of reverse Eden.

I hate plot spoilers. I try my best to avoid them. Unfortunately, when reviewing episodes of a series, it’s almost inevitable that you give certain things away. Even the very act of no longer mentioning a character in itself tells you something. This is unavoidable and acceptable plot spoilage. But what is not acceptable is to smack a massive plot spoiler in the credits sequence. Episode 9, “Et In Arcadia Ego, Part 1”, plants a massive spoiler flag in the opening credits by declaring “special guest star: so-and-so”. So now we know that that actor is in it and, of course, we know what character they play in the Star Trek universe, so… surprise ruined! Can you not have the cast list at the end of the episode, please?

Leaving meta-considerations aside, this was a disturbing episode which thoroughly upsets our moral compass. We finally arrive on Sojo’s homeworld, our crew making landfall in a less than conventional manner. We arrive as aliens ourselves on a brightly-coloured world with an almost Star Trek: The Original Series vibe about it. It’s full of life yet slightly off-kilter, a realistic and disturbing portrayal of some kind of reverse Eden: I was left unnerved and frightened by what appears to be coming up. Many new important characters are introduced, and it really feels as though the final episode will totally shatter the world we’ve come to know. The stakes have never felt higher.

Picard says in this ep that “it seems these days that all we do is say goodbye” and this episode indeed features two goodbyes. Sadly, they were robbed of some of their emotional value due to, once again, trying to cram everything into one episode. For the umpteenth time, the Game of Thrones Season 8 model doesn’t work; someone let the writers know.

“Et in Arcadia Ego, Part 1” was stronger and felt more complete than last week’s showing, and we are being propelled towards what promises to be a truly terrific finale. We are made to face the sickening possibility that we, and our heroes, might be on the wrong side of this battle. Consequently, the sadism and fanaticism on the part of the show’s supposed baddies, the Romulans, is beginning to feel less and less consequential next to the threat that the androids are convincingly portrayed as having the potential to pose. However, the rush to the end robbed many moments of a sufficient sense of gravity. None-the-less, this episode did just enough to nudge a four star review.