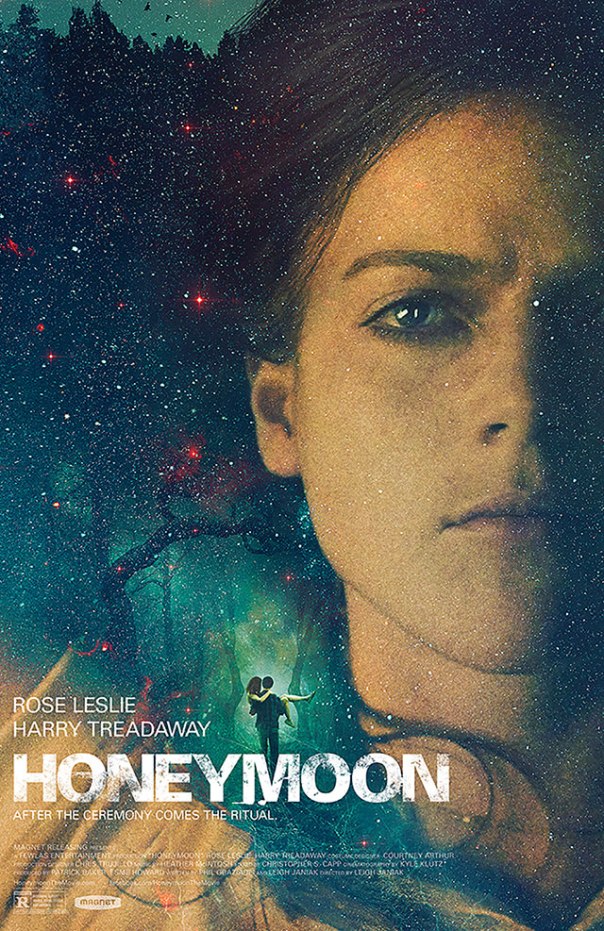 surely ranks as one of the most terrifying examples of the genre that I have ever seen.

I am a huge and borderline obsessive Game of Thrones fan. I mean, I don’t dress up and go to the conventions. And my bookshelf doesn’t boast a crumbling copy of David J. Peterson’s book Living Language Dothraki. But it certainly can’t be healthy for a 35 year old man to be repeatedly kept awake at night by an almost endless stream of fantasies where he inhabits the Game of Thrones universe as a key protagonist. How would I react if my dragons—-Wake up, Bryan, you pathetic manchild, and smell the early onset midlife crisis!

Given that context, it is very surprising to me that I somehow missed 2014’s Honeymoon starring as it does GOT‘s very own Ygritte, a.k.a., the ridiculously lovely Rose Leslie.

Leslie and co-star Harry Treadaway play head-over-heels-in-love newlyweds, Bea and Paul, who just can’t keep their hands off each other. We join them as they start their honeymoon in Paul’s family cabin in the woods. Our leads give believable albeit slightly off-centre performances, but their quirkiness brilliantly foreshadows the disturbing story to come. Paul wakes up to find Bea sleepwalking alone in the woods. Things start to fall apart quickly for the young couple as it becomes clear that something very bad happened that night.

But what happened in the woods that night? And what is happening to them now? The film never fully spells the answers out. There are many possible interpretations. Mine is extraterrestrial rape. And I think when read as an alien abduction film, Honeymoon surely ranks as one of the most terrifying examples of the genre that I have ever seen. Indeed, if alien abductions really do happen, this film paints a deeply convincing picture of the literally alien / otherly horror of that experience. Although I repeat: the interpretation of what happened is very open.

However, don’t get bogged down in the specifics of what actually happened to Bea. The events, alien rape or otherwise, are merely an incidental device to explore what can happen to a healthy and seemingly rock solid relationship when one partner is violated in some way. The actual violation could be viewed as unwanted pregnancy or perhaps the loss of one’s self to an illness such as Alzheimer’s. But I think this film pretty clearly had rape in mind. None-the-less, I don’t wish to suggest that this film was meant as an allegory of rape or some other specific traumatic violation. But merely that it examines a relationship after having undergone a (any) traumatic violation.

A brilliant and deeply unsettling film that gave me repeated goosebumps and made me shiver endlessly.

Honeymoon stars the ridiculously lovely Rose Leslie (a.k.a. “Ygritte”, of Game of Thrones fame) and Harry Treadaway as can’t-keep-their-hands-off-each-other newlyweds Bea and Paul. Honeymooning in Bea’s family cabin in the woods, things start to unravel quickly for the young couple after Paul wakes up to find his wife sleepwalking in the forest. Despite Bea claiming no memory, it soon becomes clear that something very bad happened that night.

So what did happen in the woods? The film never spells it out. But it doesn’t matter; the nocturnal events are merely a device to explore what becomes of a healthy and seemingly rock solid relationship when one partner is violated in some way.

Brilliant and deeply unsettling, the off-centre performances heighten the tension. Honeymoon gave me repeated goosebumps and made me shiver almost endlessly. Horrific and disturbing. Perhaps the finest American horror film in years.