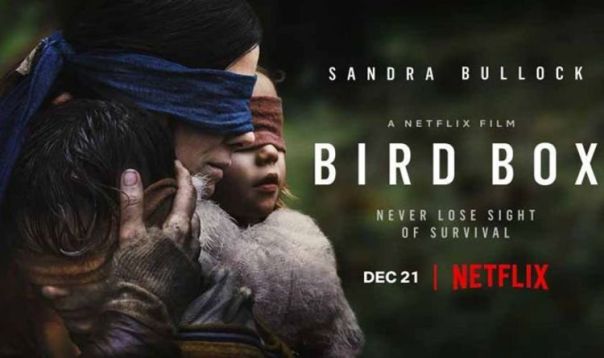 … Sandra Bullock rowing her children up a certain creek …

Bird Box is a The Happening (2008) and A Quiet Place (2018) mash-up where an evil presence blown on the wind is causing people to kill themselves (or, in the rare case, become homicidal maniacs).

Five years after an unseen and malevolent presence caused the majority of the world’s people to mysteriously commit suicide or else turn into blood-thirsty maniacs, mother Malorie (Sandra Bullock) is desperately trying to navigate a safe path through this post-apocalyptic landscape to a fabled safe haven for her two young children. The evil force manifests itself as a shimmer and a rustling breeze which seems to instantly infect people who gaze towards it. Therefore, the only way to avoid being infected is to stay indoors, or only go outside with your eyes covered at all times.

We join the story with Sandra Bullock rowing her children up a certain creek, and it might as well be without a paddle as they’re all blindfolded, to a fabled haven. The film is two narratives at the same time, cutting between her river-based journey and recanting the tale of how she got to be on this perilous solo mission cut

For years I wondered to myself how M. Knight Shyamalan could have got it so woefully wrong with his The Happening, based as it is on the absurd concept that nature is out to get revenge on mankind by infecting us with suicide blown on the breeze(!), but Bird Box‘s set-up and premise is what The Happening could potentially have been. We don’t know the source of this evil presence, nor are the details made clear. Why do some people merely become homicidal lunatics whereas the majority immediately kill themselves? Why can the evil force not enter into buildings? But these questions do not matter as the technicalities of this blight are not the focus of the story; rather, the human drama is. And the film excels. Man versus himself, man versus man, man versus time, all three classic dramas are well-played to maximum tension.

At times, The Road-style post-apocalyptic road trip (well, river trip), at times an alternative reality good version of The Happening, at times “the enemy within” dramatic plot thread of 28 Days Later, this film delivers a tense and thrilling horror ride. The cast are all wonderful in their roles. However, this film surely deserves an award for the most bizarrely random cast of all time: Sandra Bullock, John Malkovich, rapper Machine Gun Kelly (or should I say, ex-rapper, RIP, after Eminem (metaphorically) killed him in their 2018 diss battle), British comic actor from The Thick Of It Tom Hollander, jovial comedian Lil Rel Howery, and Bend It Like Beckham‘s Parminder Nagra. But despite this motley collection of all sorts, the casting never jarred: there was no Ed-Sheeran-in-Game-Of-Thrones-WTF moment. I was particularly impressed with Machine Gun Kelly’s supporting turn.

Scary, emotionally terrifying, thrilling, the blight feels real even though the full details are never spelt out. A wonderful movie, what M. Knight’s The Happening could have been.

Bullock … paddles her two young children up a certain creek …

Take 2008’s The Happening and 2018’s A Quiet Place, pop them in a blender with a pinch of Oscar (Sandra Bullock, John Malkovich) and a dash of randomness (British comic actor Tom Hollander, rapper Machine Gun Kelly, Bend It Like Beckham‘s Parminder Nagra), and voilà! An evil presence blown on the wind is causing people to kill themselves or each other (The Happening) when they look towards it (swapping A Quiet Place‘s sound for sight).

We follow Bullock as she paddles her two young children up a certain creek to an alleged haven. The film interweaves with the tale of how she came to be on this river.

Bird Box is a human drama of survival against odds.

Scary, emotionally terrifying, and thrilling, the blight feels real even though the full details are never spelt out. A wonderful movie, what M. Knight’s The Happening could have been.